As Chinese New Year approaches, I see mooncakes all over my local Asian market, as they are the traditional dessert this time of year. It’s like pumpkin pie at Thanksgiving. They clear out an entire aisle at Ranch 99 for mooncakes as the New Year approaches. Even though the New Year isn’t until February 8 this year, the grocery stores start getting crazy almost a month in advance. I went to Ranch 99 the first week in January and it was so packed that I couldn’t even park in the parking lot. I had to park a block away and walk to the store. It puts the craziness of Thanksgiving grocery store shopping to shame!

Mooncakes are beautiful pastries that are usually filled with red bean paste and egg yolks or nuts and seeds. The filling is thick and somewhat sweet. Chinese desserts are never as sweet as American desserts. Given my American tastes, I find them to be surprisingly good. The pastries are always stamped with a beautiful design.

My sister can make the traditional pastry mooncakes but they seemed a little too complicated for me to bake. I recently fell down the rabbit hole that is pinterest and discovered snowy mooncakes, which are made with mochi or agar agar. I’ve never seen these in stores so I was excited to give it a try.

Agar agar is the vegan version of gelatin. It’s actually made from seaweed. It handles differently than gelatin. One of the major differences is that it firms up rather quickly and at room temperature. I’ve never seen agar agar at my local grocery store. I’ve only found it at stores like Whole Foods and Ranch 99 or other Asian markets. It’s still considered a specialty item to American grocery stores but it’s gaining in popularity.

You can’t use a traditional mooncake mold since this isn’t a pastry. It’s best to use a flexible mold to make removing the mooncake easy. I used this mold. Even though it’s not the traditional design, it still looks beautiful. It’s also made of food grade, bpa free plastic.

I have a million ideas and flavor combinations for jelly mooncakes. My husband loves mango and coconut milk so I tried using fresh mango with coconut milk for these mooncakes. There are a lot of instructions but it’s not really that complicated. Since the agar agar firms up quickly, this process goes fast. I’d make sure to have all your ingredients ready to go. Make sure to set aside a time where you won’t be interrupted. If you start pouring the coconut milk and then step away for what feel like only a few minutes, you may come back to a saucepan filled with solid coconut milk instead of liquid coconut milk. There’s no coming back from something like that. I did that exact thing and thought I could reheat the coconut milk back into its liquid form. No such luck. It does liquefy somewhat but it’s a lumpy mess. You just need to start over. 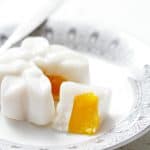 If you make this recipe, be sure to snap a photo and hashtag it #FOODFASHIONANDFUN. I’d love to see what you make!