This Creamed Leeks Without Cream recipe is a great springtime leek side dish. It’s easy and requires only a few ingredients to let those leeks shine. This recipe is allergy friendly (gluten, dairy, shellfish, nut, egg, and soy free) and suits the Autoimmune Protocol (AIP), Whole30 and Paleo diets.

Creamed leeks without cream!! What?!? How?

Not only is this Creamed Leeks recipe dairy free but it’s also nut free. Recipes that say they are creamy usually rely on milk (nut, coconut or otherwise) to thicken the sauce but not this recipe.

How to make creamed leeks recipe?

This sauce is mostly just bone broth that’s been reduced down. The method is very similar to how you make risotto. You saute some leeks and then slowly add bone broth. The bone broth is constantly simmering and cooking down to create a smooth and silky saucy leek.

There aren’t many other ingredients in this recipe either. Leeks have a fantastic flavor that is very subtle. I think when you use really good and fresh produce then you really don’t need much else. This recipe is a very good argument for eating seasonally. Eating produce that’s in season means that you are getting food at its peak, which means it taste better and is better for you. It also means that you need to work less in the kitchen to add flavor to your food because nature has already done it for you.

If you’re wondering about how to clean leeks, I have an epic post with instructions.

What can I serve this leek side dish with?

I love it with a few lighter dishes. It goes especially well with anything in season during the springtime though. Check out these recommendations: 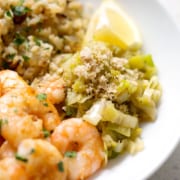 This Creamed Leeks Without Cream recipe is super special because you can only find leeks for a short time throughout the year. This recipe lets the leeks subtle flavor shine as it only has 5 other ingredients. This recipe is allergy friendly (gluten, dairy, shellfish, nut, egg, and soy free) and suits the Autoimmune Protocol (AIP), Whole30 and Paleo diets.
Prep Time10 mins
Cook Time15 mins
Total Time25 mins
Course: Side Dish
Cuisine: American
Servings: 4 as a side
Calories: 121kcal
Author: Beth Chen

If you’re wondering about how to clean leeks, I have an epic post with instructions. Here's the link: https://thehonestspoonful.com/how-to-clean-leeks/