Please note that this recipe is not AIP/Paleo. However, I'm looking forward to changing the recipe to make it compliant soon.

I’m not a huge fan of super sweet meats so the traditional glazed ham doesn’t appeal to me. I’m not into ‘meat candy’ as a main dish. I thought I’d try to layer the flavors so that it’s not a one-note glaze. Instead of using jam, honey or sugar, I used a fruit spread so that you get a more natural sweetness from the fruit. The fruit spread tastes like the essence of the fruit, which I love. The other herbs and spices I used all compliment the fig and taste great with the ham. The ham is delicious and slightly fruity.

If you have leftovers, you can throw them into fried rice, soups or my Herbed Cauliflower Rice recipe. Don’t forget to save the bone to use in my Leftover Ham Bone Soup as well. 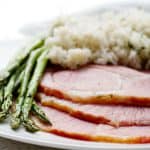