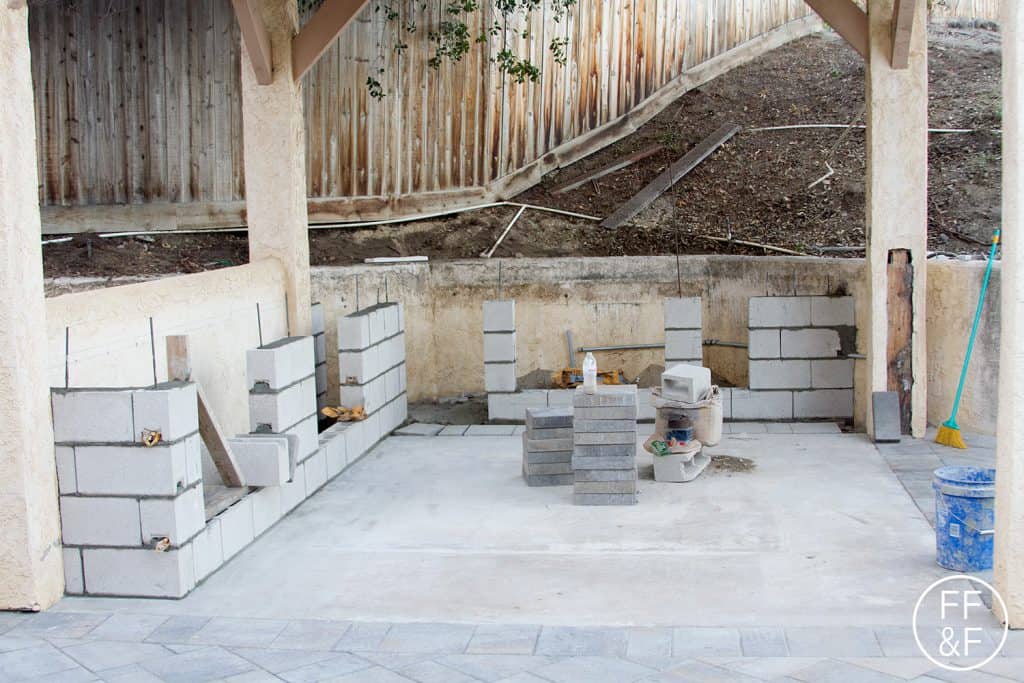 Our home came with an existing covered patio. IT looks like this area was originally used for a hot tub as there was already an electrical and gas hookup. We knew that we eventually wanted a built in BBQ area but thought it was something that we could built in a few years. In the meantime, we thought we would get a portable grills. Once we started considering the size of the portable grill versus the covered patio, we realized that the scale was all off. The grill would seem miniature compared to the structure. The rest of the yard was really coming together and starting to look, well, amazing. The area started to feel like an eyesore compared to the rest of the yard. A finished built in BBQ would really make the area seem finished. 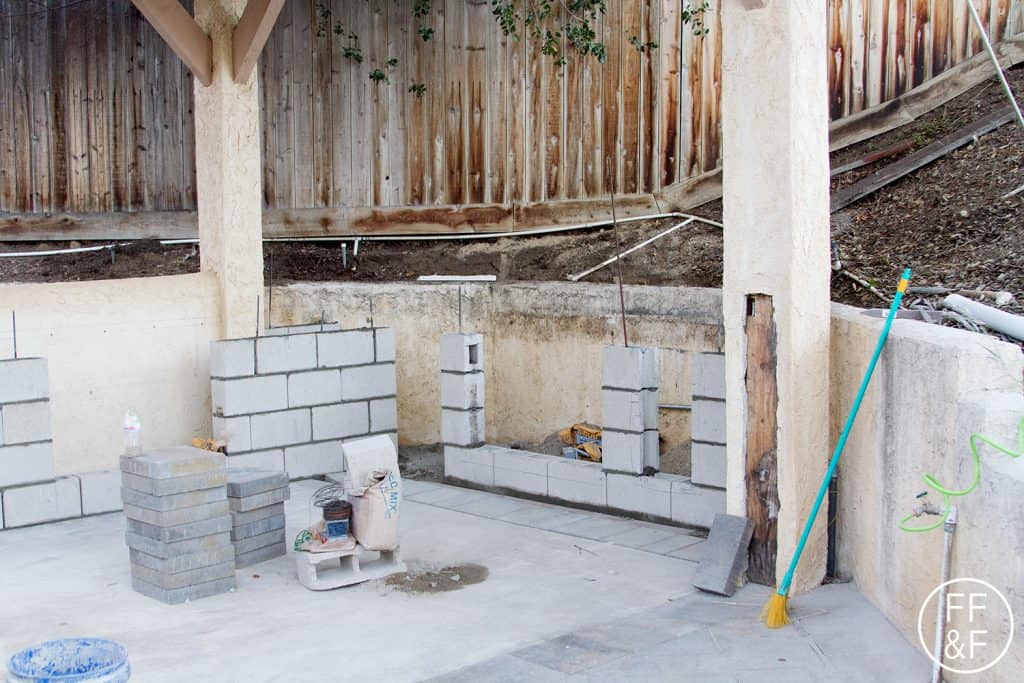 We decided to research the costs involved with a built in BBQ. As much as we love working with Panjia, we just couldn’t afford their fee. We also knew exactly what we wanted and didn’t require any design assistance. It was also a small enough project that we could manage a contractor ourselves so we hired a freelance mason. It was a lot more work for us but we were able to save about 50%.

We went with a stacked stone facade and concrete counter top. The stone was a light white/beige color that compliments the rest of the yard. It’s a versatile stone that will go with warm or cool tones. We have been considering painting the house a different color so we made sure that the stone color would be neutral. As you already know, we love the concrete look so we were glad to use it as the counter top.

We also finished the last few steps in the swimming pool construction, which were the pool plaster and the pool cover. 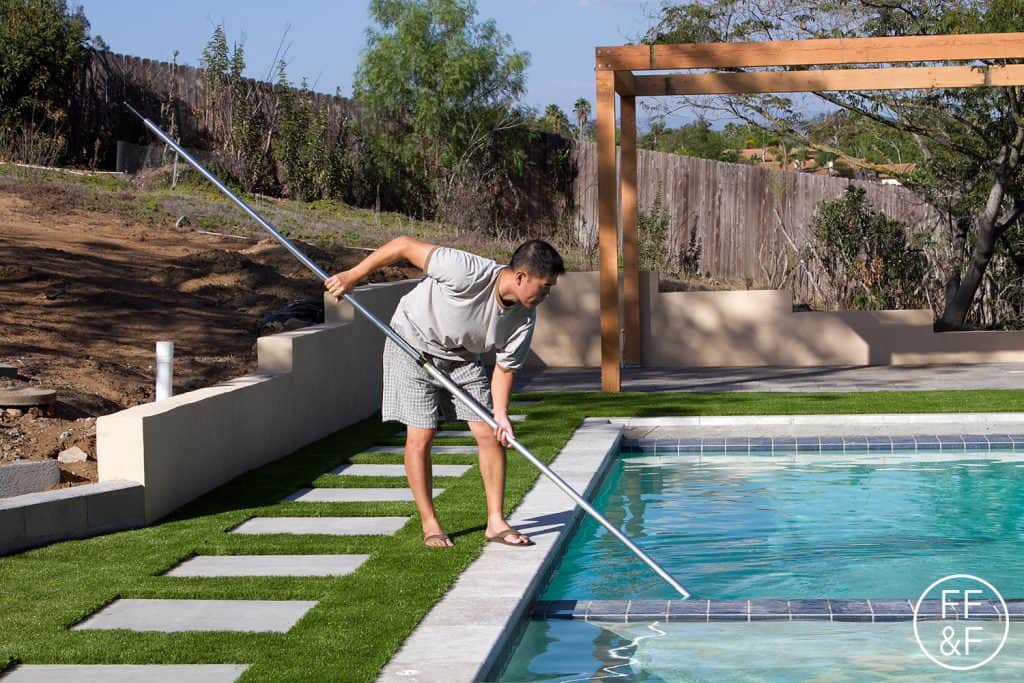 The pool plaster took about a day to apply but we needed to ‘scrub’ the plaster  with a pool brush for about a week. It helps keep the pool plaster from being too rough. It's something that we will need to occasionally do as maintenance for the pool. It keeps the plaster looking and feeling nice. It's not a big deal as it only takes about 10 minutes. 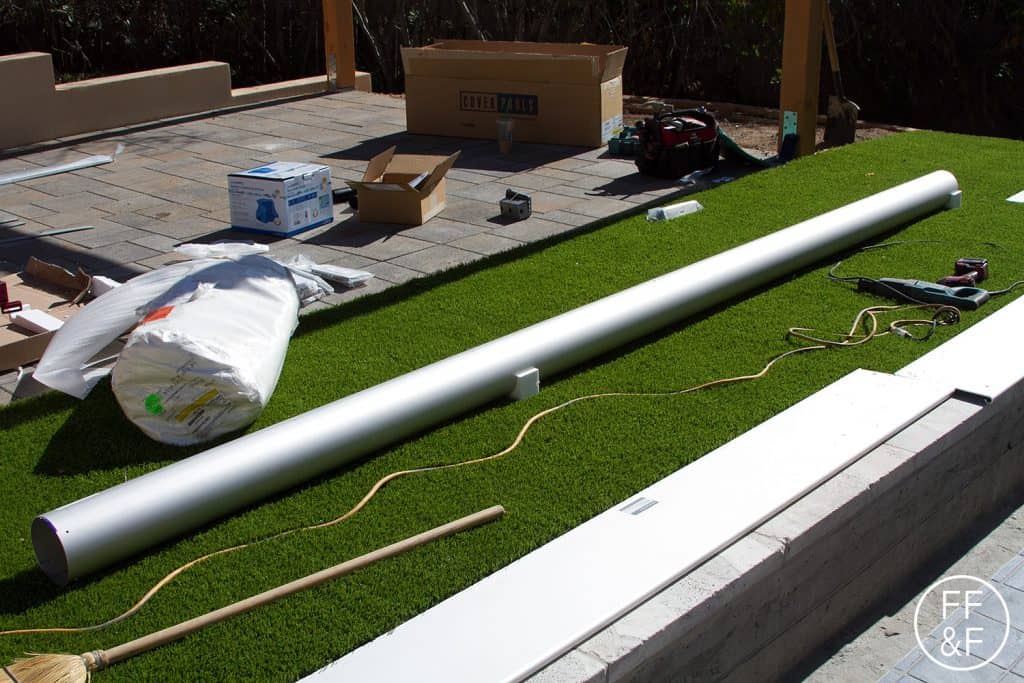 The pool cover was easy as it only took a few hours to install. The pool cover is so strong it could hold an elephant. We’re not concerned about protecting the pool from elephants but mainly just little kiddos that can’t swim. It also has a lock so no one can access the pool without our permission. 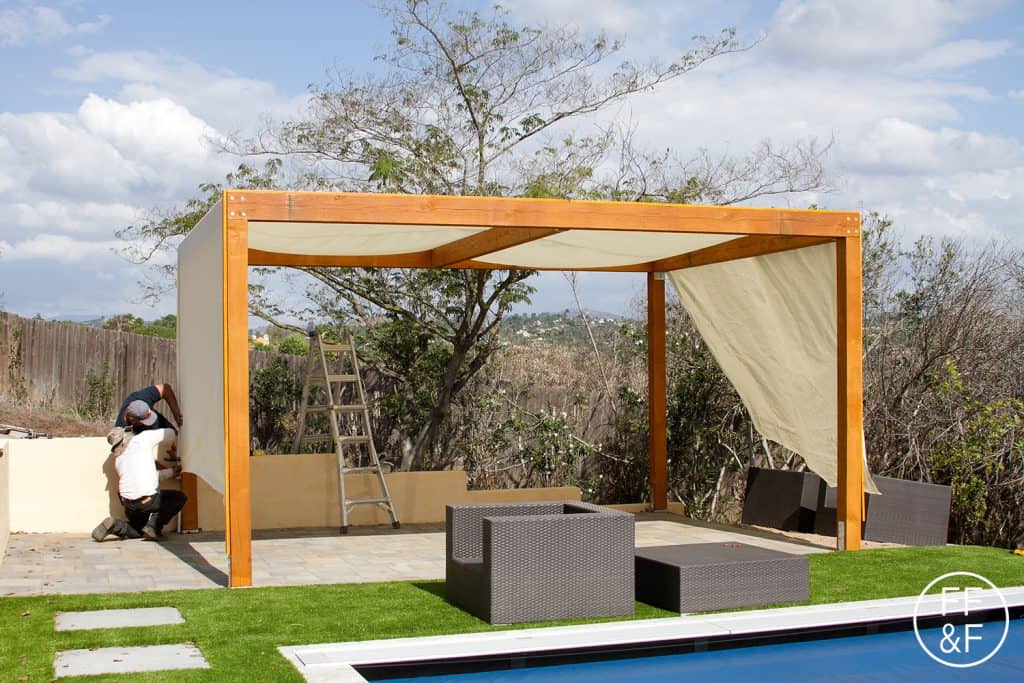 We were so close to being done with the backyard and then we had the final inspection of the pool. The inspection for the pool was fine but the inspector, kindly pointed out, that a permit for the cabanas. Apparently our area is different than most of the county and requires a permit for this type of structure that’s over a certain square footage. This was probably the most frustrating part of the project as this, seemingly simple permit, delayed the project.

There are two cabanas, one of which made out of all wood and the other is covered in a sunshade. The all-wood cabana is something that is very common but the sunshade-covered cabana was apparently very unusual for the city. There didn’t seem to be a streamlined process to get it approved. Our landscaper had to jump through multiple hoops, including finding fire resistant fabric and getting it approved by the fire marshall. This whole process took weeks of research and waiting before we could move forward. I'm glad that we had a good and patient landscaper because I wouldn't want to be the one jumping through those hoops. 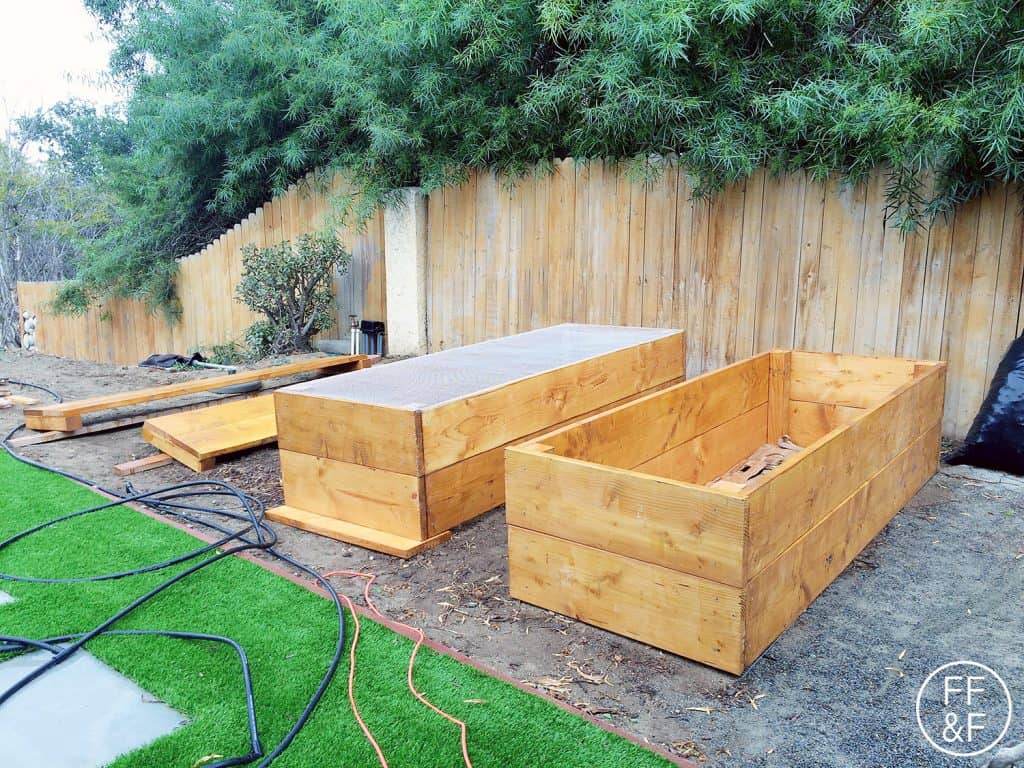 While we were waiting to get the go ahead for the cabanas, Panjia moved onto the front yard. Another last minute decision to make raised garden beds. When most of the hardscape was finished we found the perfect spot in the side yard. We thought that this would be an easy project. It was not. It took much longer than expected and we kept running into issues. The finished product looks amazing and I can’t wait to start growing our own little garden. I’ll post my design and a ‘how to’ with a list of supplies for the garden beds soon. Hopefully, we can help you learn from our mistakes and make building garden beds a little bit easier for you than it was for us.

The renovation is so close to being finished so stay tuned for the next step (and last before the final reveal) in our renovation, which is the Driveway and Front Walk! In the meantime, be sure to follow along the renovation on instagram using the hashtag #BethHomeProject.

If you missed my last post, check out Front and Backyard Renovation: Drainage, Retaining Walls, Pavers and Turf.