After we finished the demo, it was time to turn our focus to the pool. The rest of the yard has to wait as trench need to be dug so that the plumbing and electrical for the pool can be added. Before we get to the plumbing and electrical, we needed to build the frame for the pool out of steel. It took 2-3 guys, about a week to build the steel frame. 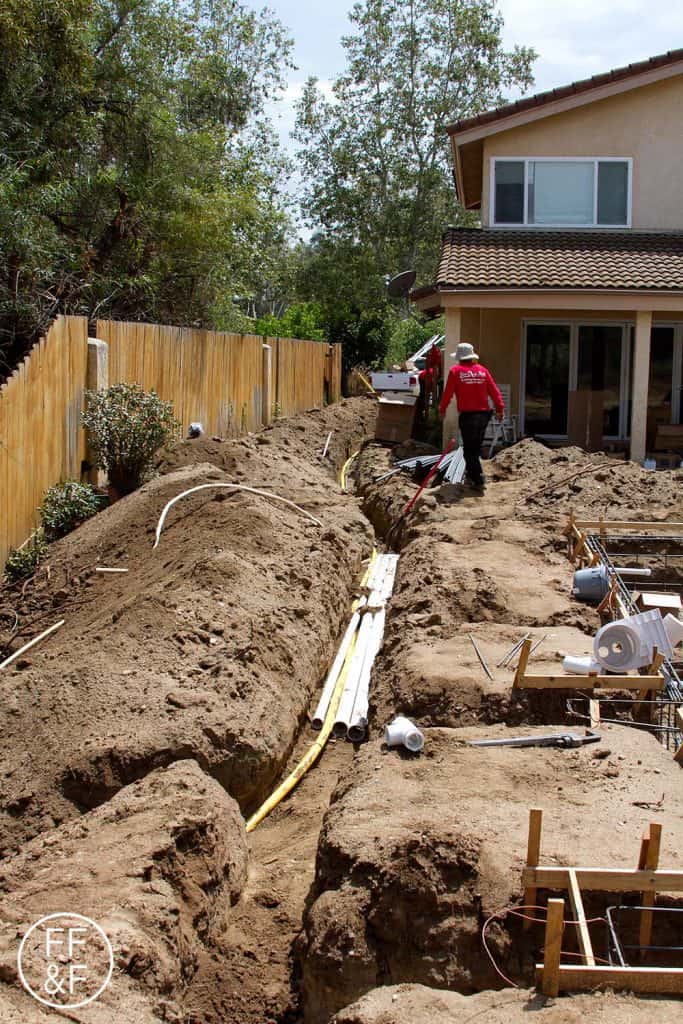 Once the steel was in place then we had another bulldozer in the yard to dig the trenches. It wasn’t as large as the one used to dig the pool. I think they called it an excavator. The machine made this go pretty quickly. The trench digging only took about a day and a half. I couldn’t imagine trying to do it completely by hand. It would take forever.

The plumber/electrician had a big job to do. He installed the pool equipment on an existing concrete slab that is towards the back of our yard. We believe that the concrete slab was, at one time, a shed due to the location and slope of the land. We got lucky, as it became the perfect location for all of the pool equipment. The land slopes downward so it’s completely out of view from the pool and the house.

While the plumber was here, we hired him to do a few additional tasks. We only had two spickets on the house, which were in the front yard. It’s totally stupid. I don’t know who originally designed the house but when you have a quarter acre and a sprinkler system you’d think they would add a few extra spickets. Well, they just don’t exist so the plumber added three spickets in the backyard. We now have one at the lower cabana, the bbq area and the side yard near the covered patio. We were going to add one to the upper cabana but digging a trench all the way up the hill was complicated and cost prohibitive.

While we had a gas hookup in the bbq area, it was not up to code. We could have just brought the hookup up to code but since the house is 30 years, we were concerned about the underground pipes leaking gas and the house blowing up. We thought it was a good idea to just abandon the old pipes and bring in a new gas line. We already had the trenches open and the plumber on site so it seemed like a no brainer. It’s better to do it now than wait until after we have the pool finished and the landscaping done. I feel like the plumbing and electrical is the most underappreciated part of the pool building. Most of his work is underground or eventually covered in concrete so you never see the amount of pipes and wires that it takes for a pool to function.

Stay tuned for the next step in our renovation, which is the pool concrete! In the meantime, be sure to follow along the renovation on instagram using the hashtag #BethHomeProject.

If you missed the demo, check out my last post, Backyard and Frontyard Renovation: Demo.