I’ve cooked at least 3 glazed hams this holiday season. That means we always have ham leftovers and a giant ham bone. Leftover Ham Bone soup is a great way to transform your leftovers into something special.

I’m always making chicken and beef stock out of our leftovers so I was determined to find a soup to use up this leftover ham bone. Traditionally you’d use the leftovers to make a split pea soup but I’ve never been a fan. In fact, most of the recipes I’ve found that use leftover ham bones all include beans. Those are a no-no on the autoimmune protocol diet so I had to get creative.

The ham broth that you create is very flavorful. I used my favorite root veggies – carrots and sweet potatoes – to add to the pot. They soak up those ham juices so well. I also added a big bunch of spinach for some added color as well as something to temper the sweetness of the sweet potatoes and carrots.

I’m so excited at how well this soup turned out. It’s truly a brand new dish. No one would know that it’s leftovers! Also, a giant ham can run you $30 or more so it’s nice to squeeze ever cent out of it. I like that you only have to spend a few extra bucks to get a brand new meal. 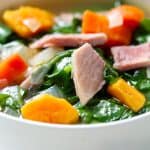