I realize that this Spinach Stew recipe takes a whopping 60 minutes to make but I assure you it’s worth the wait. Don’t even think about trying to shave time off of this dish because it just won’t be the same. This Spinach Stew side dish only uses 6 ingredients and slow cooks them to perfection. It’s the closest thing to an allergy friendly, AIP and Paleo creamed spinach recipe you’ll ever find.

Spinach is a great veggie and packed full of healthy stuff. I try to eat it as often as possible, because it’s important to pack on the nutrient dense foods when you are on a restricted diet. However, there are only so many times I can have sautéed spinach or a spinach salad.

When you can’t have dairy, soy or any nut milk (including coconut) it’s nice to taste something so smooth, creamy and flavorful. This recipe works because it slowly condenses the tasty onion, spinach, spices and broth. The slow cooking intensifies the flavors and makes me so freaking happy. 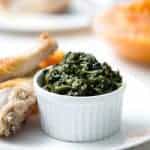